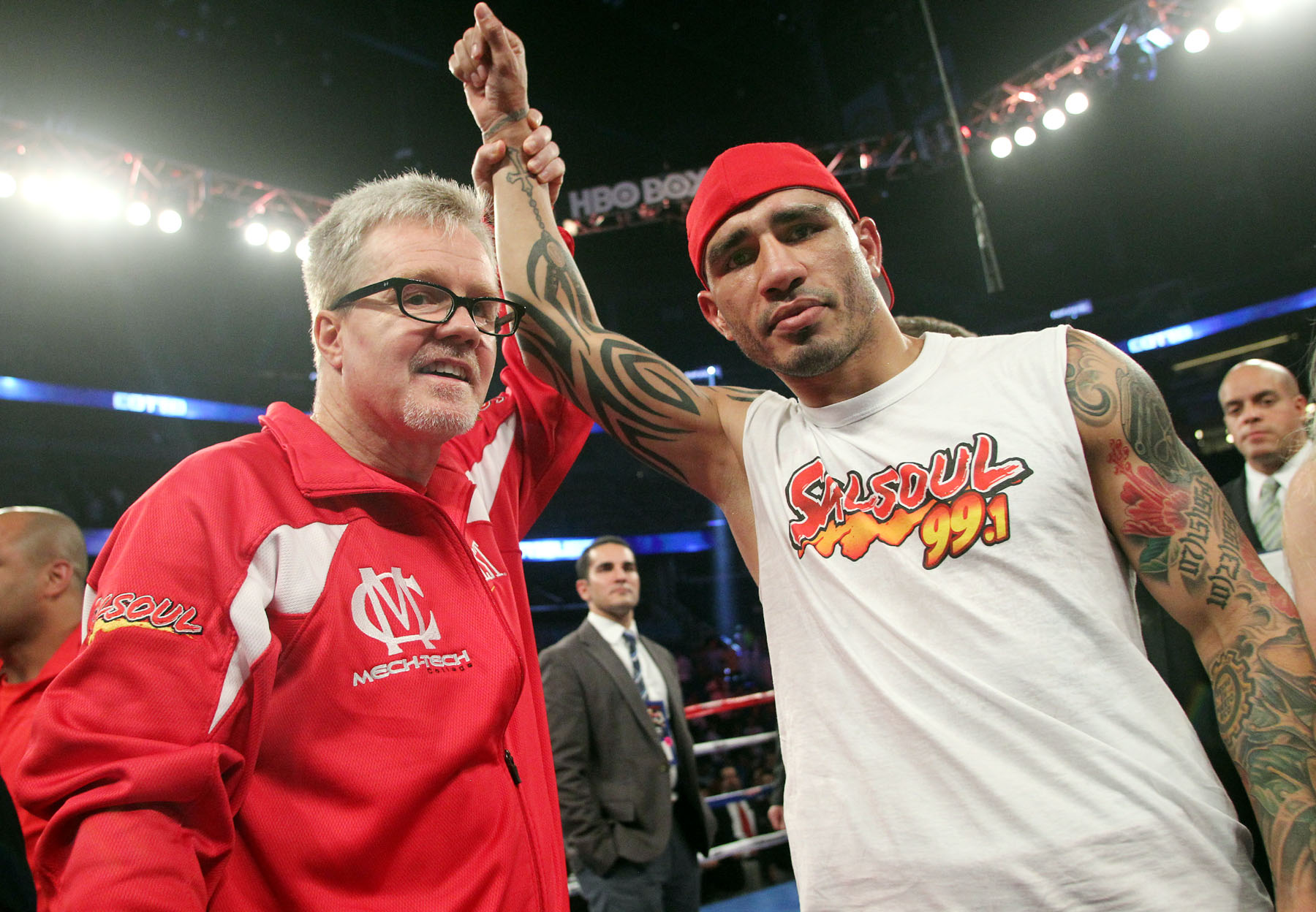 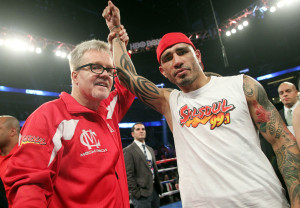 WBC middleweight champ Miguel Cotto (39-4, 32 KOs) has been caught smiling lately and six-time trainer of the year Freddie Roach says it’s because of weight. Cotto, who began his career at 140 pounds, is now campaigning at 160 pounds under Roach.

“You know when you can have breakfast for the day of a weigh-in you’re going to be a whole different person and I think the quality comes out in the ring,” Roach said.

“The key to Miguel is putting him at the right weight class, to fight at a heavier weight class so he wasn’t killing himself making weight.”

Along with the luxury of breakfast the day of a weigh-in, the added weight gave Cotto the opportunity to make history and win the WBC middleweight title from Sergio “Maravilla” Martinez (51-3-2, 28 KOs) last June. Martinez was dropped four times and after nine rounds the fight was stopped and Cotto was the new champion.

Then came Freddie Roach who Cotto employed before his 2013 comeback against Delvin Rodriguez (28-7-4, 16 KO) and Cotto suddenly seemed good as new. He TKO’d Rodriguez in three rounds and signed to fight Martinez next for his first fight at 160 pounds.

Cotto is now the first Puerto Rican boxer to win titles in four weight divisions and is once again atop of boxing’s most wanted list for big money fights. A proposed showdown with Mexico’s Canelo Alvarez (44-1-1, 31 KOs) is to be expected this year.

In an interview with thaboxingvoice.com Roach said that he believed weight is important to both Cotto and Manny Pacquiao’s success.

“I think that Pacquiao and Miguel are two guys that I let move up and fight at a more natural weight and they’re happier.”

However when rebuilding a fighter, weight is only a piece of the puzzle, another piece is the relationship between fighter and trainer. Cotto has had multiple trainers since 2009 including the late Emanuel Steward as well as Cuban coach Pedro Luis Diaz, who trains Guillermo Rigondeaux. Neither was able to yield the kind of results Roach has from Cotto.

“It’s just the relationship between fighter and the trainer, you know the thing is I get along with my guys. If I don’t like them I can’t train them, you know that’s a fact but the thing is we get along. I respect him, he respects me and it works out really well.”

Roach is a strict practitioner of the old-school methods of boxing and demands the same dedication from his fighters, which is why he and Cotto mesh so well. He was a fighter and knows from experience how a boxer suffers to make weight.

“Everyone used to say ‘Why are you so mean’ I’d say, well I’m f——- hungry,” Roach said reflecting back on his days as a prizefighter.

Now neither Cotto nor Roach is hungry as both are at the top of their fields. Roach is a sure-fire nominee for another “Trainer of the Year Award” and Cotto is “The-Man” at 160.

Cotto could have retired after 2012 and no one would have blamed him. Roach has plenty of fighters and doesn’t need another big name in his stable, but their partnership is both interesting and successful so far and many fans want to see what else they will try to accomplish next.