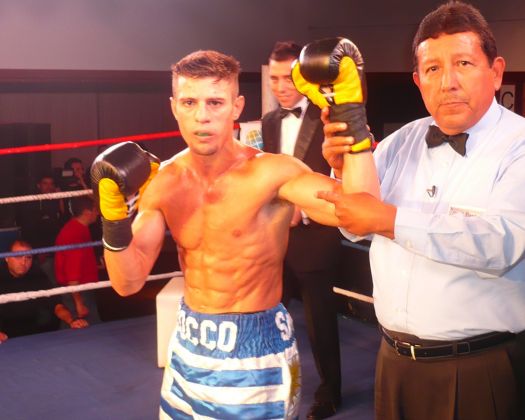 You’d remember if you’ve ever met Vegas-based featherweight Rocco “So Cal Kid” Santomauro (11-0, 1 KO). He’s the kind of guy who is hard to forget.

The well-liked and colorful 26-year-old is as known for his out-of-ring antics, such as his signature move of eating cake while weighing in, as he is for his undefeated streak as a professional fighter.

Originally from Hesperia, California, Santomauro moved to Vegas six years ago to pursue his dream of becoming the first world champion in history of Uruguayan heritage.

Santomauro will appear on Saturday, May 31, as one of the featured undercard fighters on DiBella Entertainment’s and Sampson Boxing’s (in association with Right Hook Promotions) event entitled “Real Fights” in the Tropicana Pavilion at the New Tropicana Resort in Las Vegas. His opponent is, thus far, TBA.

“It’s a natural energy,” said Santomauro of his flashy ring persona. “I watched a lot of movies growing up and always saw the hero come in with a lot of energy. When it’s fight time, I bring that in with me. Its’ a winning energy. I come in with the attitude to fight and win in a memorable way.”

Santomauro also says there’s an underlying motive for his penchant for dining on the scale. “I hate making weight. About six years ago, I started working with a doctor and I learned how to diet properly. I’m at weight now a week before my fights, while other fighters are dying and suffering. I’m always light the day of the weigh-in. I could eat breakfast, but I’d rather have my meal when I step on the scale. I do it for show and to intimidate my opponent and get the psychological edge. They get very angry. Plus, the media, the commission and fans all seem to enjoy it.”

Born to an Argentinean mother and Uruguayan father, Santomauro says it’s a funny story how he became connected with his promoter: the equally colorful Uruguayan-born Sampson Lewkowicz of Sampson Boxing.

“My dad came to visit me in Vegas. I dropped him off at the airport to go home. My dad is crazy. He was at the airport and heard a guy on the phone speaking about boxing in Plate River Spanish, so he started following him around. At about 5:30 am I got a call from my dad and he said he met a promoter from Uruguay. I’m like ‘??? There’s only one promoter from there, you ran into Sampson?’ Next thing you know, Sampson is on the phone. He said ‘you’re going to be fighting for me in July on ESPN2 and that’s that.’ That’s how it started. There are no world champions from Uruguay and Sampson shares my dream of making me the first ever.”

“I’m in your face. Even though I don’t have a lot of knockouts, anyone who knows me knows I hit very hard. I’m very aggressive. I’m the one who controls the pace of the fight. With the team I have in place and all the hard work I put in every day, I feel like I could fight the world title right now, but I need to cross a few more bridges before I get there. Hopefully by the end of next year, I’m ready to go.”