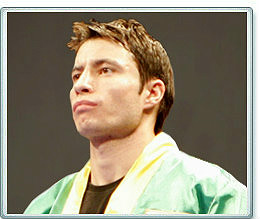 Gary Shaw Productions wrapped up its lightweight featured card on ESPN 2 Friday Night Fights earlier this evening and it ultimately produced a couple of winners that could be well on their way to making an impact in the lightweight division.

In the card’s feature matchup, fans were treated to a spirited contest between two willfully determined fighters in Jonathan Maicelo and Rustam Nugaev. Both fighters had to dig deep in the fight and unleashed bombs upon one another. Maicelo was moving well early on and his punches were delivered with bad intentions. However, Nugaev kept a relentless pace and pressured Maicelo in a very effective manner.

It was clear that Maicelo was the more gifted athlete, but Nugaev landed the cleaner punches and in the 6th round he started putting his punches together better. In the 8th, Maicelo found himself on the receiving end of a well-timed right hand that Nugaev was able to turn over perfectly. The shot sent Maicelo to the canvas and although it was a devastating shot he still made an attempt to get up off the mat, but it was to no prevail as referee Jack Reiss had already called a halt to the bout, giving Nugaev the 8th round KO.

Still, Maysonet Jr. displayed some raw, natural talent and his physical framework alone is enough to stay optimistic on his ability to rebound. Tolmajyan’s stock should rise after this win and he was hopeful of receiving another opportunity soon.

“I performed well-enough to get the win, but I know I can bring much more to the table. The kid (Maysonet Jr.) is talented and he was awkward to fight with his long body. I think I did a good job finding a way around his natural advantages, he gained some good experience in the ring and he’ll come back stronger. I’m ready for my next fight, I want to get right back in there and I felt good out there right now. Even though I have it in me to produce more than I showed tonight my confidence is where it should be and I just want to ride this momentum,” Tolmajyan said.

Gary Shaw was delighted to see the fireworks produced by the 2 combatants in the main event, but he wasn’t surprised and he knows that fans appreciate unfiltered action.

“It was a tough fight for Maicelo and we know that coming in; this fight was supposed to be a step up and we matched these guys based on the fact that we knew they’d create fireworks. It was a good fight and I’m sure that it was exciting for both the live and TV audience. Tonight the fans got two see some great fights,” Shaw said.