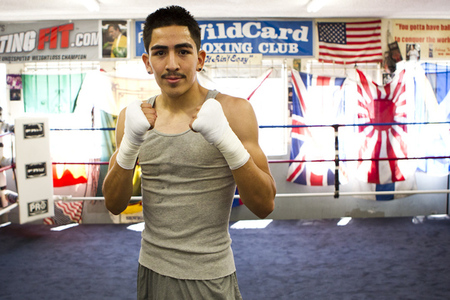 U.S. Olympian Joseph “Jo-Jo” Diaz‘s bout against an opponent to be named will also be broadcast live on CBS, the first live fight on CBS Television in 15 years.  Rounding out the early portion of the fight card will be Olympians Errol Spence and Marcus Browne, who made their pro debuts one month ago on November 9, in separate bouts also against opponents to be named.

But that’s not all, as SHOWTIME EXTREME will kick-off the evening action at 9:00 p.m. ET/PT (delayed on the West Coast) with unbeaten welterweight Shawn “Showtime” Porter stepping up to the plate against surging former World Champion Julio “The Kidd” Diaz.  Also slated for undercard action will unbeaten East Los Angeles prospect Frankie “Pitbull” Gomez taking on Pavel Miranda.

Tickets for the SHOWTIME televised fight card are priced at $150, $100, $75, $50 and $25, plus applicable taxes and service charges, are on sale now and available for purchase at the Los Angeles Sports Arena box office, all Ticketmaster outlets, by calling Ticketmaster at (800) 745-3000 or online at ticketmaster.com.  Tickets for fans traveling from the United Kingdom are available for purchase online at www.sportscorporation.com or by calling +44 (0)845 163 0845.

Tickets for the CBS televised fight card will be free of charge as part of a Golden Boy Promotions Holiday Fanfest and can be acquired at Los Angeles Sports Arena box office.

Perhaps boxing’s most exciting fighter, IBF Bantamweight World Champion Leo “Terremoto” Santa Cruz (22-0-1, 13 KO’s) is a thrill machine with a warrior’s heart, making him a fan favorite wherever he goes.  In the midst of a breakout year, the 24-year-old from Los Angeles won his first world title in June, beating Vusi Malinga, and he has since defended it with knockout victories of Eric Morel and Victor Zaleta, making him the perfect candidate to be aired on network television.

Unbeaten in 16 professional fights, Mazatlan, Mexico’s Alberto Guevara (16-0, 6 KO’s) is expected to give Santa Cruz a tough battle in their 12-round clash and with the high stakes involved, expect “Metro” to come out with guns blazing on December 15.  A three-year pro, Guevara is taking a big step up against the world champion, but is ready for the fight of his life.

A proud native of South El Monte, California, 20-year-old southpaw Joseph Diaz Jr. was a 2011 U.S. National Champion at featherweight and winner of his opening bout at the London Olympics earlier this year, garnering him a devoted fan following.  Now ready to take the next step in what is expected to be a spectacular professional career, Diaz makes his pro debut on December 15 in a4-round fight against an opponent to be determined.

A native of Mexicali, Mexico now making his home in Los Angeles, Alfredo Angulo (21-2, 18 KOs) made his long awaited return in November after an emotional year out of the ring, but “Perro” delivered on the promise he has shown over the years as he took just 56 seconds to knock out Raul Casarez.  Now determined to make up for lost time, the 30-year-old power puncher is back again and looking for another knockout win, this one over 20-year-old Tijuana product Jorge Silva.  Silva (19-2-2, 15 KO’s) has some dynamite in his gloves as well, and after two straight wins and a draw with Japan’s Yoshihiro Kamegai, he’s got all the momentum he needs to score the biggest victory of his career.

The hottest prospect in the heavyweight division, Tuscaloosa, Alabama’s Deontay Wilder (25-0, 25 KO’s) has left no one in his path standing after winning a Bronze Medal at the 2008 Olympics.  Standing at 6-foot-7, the “Bronze Bomber” has not only shown power in his victories over Damon McCreary, Owen Beck, and Kertson Manswell, but his charisma and personality have captured a huge fanbase for the 27-year-old that he hopes to grow even bigger on December 15.

One of the few heavyweights that match Wilder with not only an unbeaten record, but also in size, Pensacola, Florida’s 6-foot-7 Kelvin “Price is Right” Price (13-0, 6 KO’s) will present some difficulties for the former Olympian that he has yet to see in his pro career.  A six year veteran who got a late start in the sport, the 37-year old is best known for spoiling the perfect record of hot prospect Tor Hamer in 2010.  He’s ready to play that spoiler role again when he faces Wilder.

Akron, Ohio’s Shawn Porter (20-0, 14 KO’s) is an exciting welterweight who is beginning to make his move on the elite in his division and is doing it with a two-fisted, aggressive attack that none of his opponents have been able to handle.  A decorated amateur and 2008 U.S. Olympic team alternate, the 25-year-old Porter won the NABF welterweight title by beating Hector Munoz in 2010 and he added the NABO crown in July with his hard fought win over the respected Alfonso Gomez.