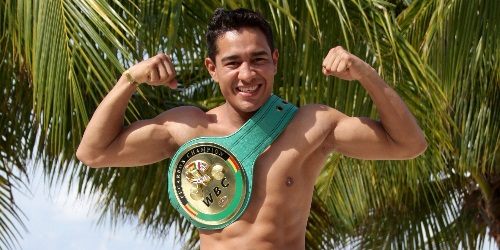 In the 10 round co-main event of the Televisa and FOX Deportes televised card, Yesenia “La Nena” Gomez collides with Arely “La Gemela Diestra” Valente in an all-Cancun rubber match for the WBC Youth Flyweight Championship, and in the televised opener, former world champion Ana “The Hurricane” Julaton battles Celina Salazar in a featherweight bout.

Thompson vs. Miura, a 12 round bout for Miura’s WBC Super Featherweight World Championship, is presented by Golden Boy Promotions and Cancun Boxing de Pepe and sponsored by Corona, Periodico QueQui and Quintana Roo Tourism. Doors open at 6:00 p.m. CT and the first fight begins at 6:30 p.m. CT.  The Televisa broadcast will air in Mexico on Channel 5 beginning at 10:30 p.m. CT and the FOX Deportes broadcast will air at 11:00 p.m. ET/8:00 p.m. PT in the United States

Currently on the most torrid streak in boxing today, Cancun’s Sergio “Yeyo” Thompson (27-2, 25 KO’s) has not just won 13 consecutive bouts over the last three years, he’s won 11 straight by knockout, winning the WBC FECARBOX and WBC International Silver titles in the process. Coming off a fourth round stoppage of Gustavo Sandoval on May 18, the 29-year-old plans on making the most of his big opportunity on August 17.

Tokyo southpaw Takashi Miura (25-2-2, 19 KO’s) is a similarly dangerous fighter when the bell rings and with five straight wins (including three consecutive KO’s) the 29-year-old will be bringing the heat against Thompson.  A longtime Japanese champion at 130 pounds who defended his belt five times, Miura added a world championship to his resume on April 8, 2013 when he dropped Gamaliel Diaz four times before stopping him in the ninth for the WBC crown he defends in Mexico next month.

After a rough 1-2 start to her pro career that included a April 2012 loss to Arely Valente, Yesenia Gomez (6-2, 3 KO’s) rebounded in remarkable fashion, winning five straight. In March of 2013, Gomez got even with Valente, winning a ten round decision to take the WBC Youth title, and she successfully defended her crown with a first round TKO of Blanca Diaz in May.

20-year-old rising star Arely Valente (11-1, 6 KO’s) has stayed extremely busy since turning pro in 2011, fighting all comers as she pursues a world title. In October of 2012, the hard-hitting Valente stopped Liliana Ordonez in six rounds to win the vacant WBC Youth title, but she would lose the belt to a previous victim, Valente, via ten round decision on March 16 of this year. On August 17, she gets her shot at redemption.

A stellar amateur boxer who has carried that success into the pros, Filipino-American Ana “The Hurricane” Julaton (12-3-1, 2 KO’s) is a former WBO and IBA world champion on the road back to the title. Winner of two straight, the 33-year-old from San Francisco has become a fan favorite in Mexico, where she has fought three of her last four bouts.

San Antonio’s Celina Salazar (4-1-2, 1 KO) is a rising star in the 122-pound weight class, with her only pro loss coming against world-renowned Melinda Cooper in September of 2012.  Owner of victories over Nohime Dennisson and Christina Ruiz (twice), the 24-year-old is well-prepared for the fight of her life against Julaton.