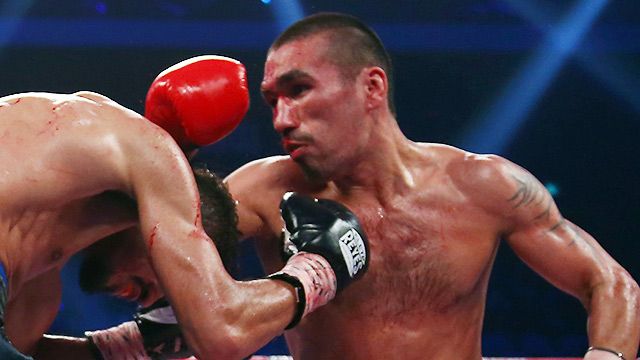 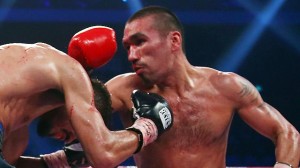 Rustam Nugaev squared off with Denis Shafikov in the main event of tonight’s ESPN Friday Night Fights, live from Chumash Casino in Santa Ynez, California. It was an IBF lightweight eliminator scheduled for 12 rounds. The IBF title is currently held by Miguel Vazquez, who is scheduled to defend his title against Mickey Bey on the Mayweather-Maidana undercard.

The fight started off in a manner we expected and gradually got better as the 1st round preceded, with Nugaev having the slight edge.

Nugaev continued to press the issue in the first round while establishing the tone of the fight as well as his height advantage. When Nugaev gave up his height advantage Shafikov took full advantage by delivering vicious uppercuts. Shafikov picked his moments early on, but when he did let go of his hands he made it count.

Shafikov showed some early commitment to the body, something that was probably more expected of from Nugaev. The fight was exciting in spurts, but it really began to heat up in the 3rd round as Shafikov forced Nugaev to stand straight up by closing the distance and keeping the fight within his power range. Shafikov made Nugaev pay, hard, and landed vicious body shots before following up with the uppercut. Shafikov closed the 3rd round with devastating flurries and took the round handedly.

Just as some separation was being made in the fight, Nugaev came back strong in the 4th to squash any hopes of Shafikov running away with the fight just yet. Nugaev used the pressure style that he has become known for and moved a bit better as well, at least enough so that he wasn’t a sitting duck for Shafikov’s attack.

The 5th round was almost storyboard type stuff, even for the most part but Nugaev did a little more in the round as a whole in terms of activity while Shafikov did more damage with fewer punches towards the end of the round. It was an intense round with plenty of action. The scene was being set for a Friday Night Fights Classic.

However, Nugaev was showing signs of stalling out and the cut he suffered in the 4th, from what referee Jack Reiss ruled an accidental head-butt, was clearly affecting his performance in the ring. Still, you had to give Nugaev credit for showing heart and staying in the fight, maybe not from a competitive standpoint, but he was fighting back.

The closing moments in round 7 were similar to the couple previous rounds where Shafikov landed some scary powerful shots on Nugaev to close the round. It would be hard to call Nugaev lucky in round 7, but he was at least fortunate that those big punches came in the closing seconds of the round instead of early enough to capitalize on because it was clear that Nugaev lost something after each round ended.

The cut was bad and it only got worse as Nugaev continued to take punishment. In between round 8 and 9 there was heavy discussion amongst Nugaev’s corner to stop the fight, and even Jack Reiss made his feeling known that he was getting ready to stop the fight.

The 9th round started in a similar manner to the way the 8th ended and it saw Shafikov landing to the body to set up the big shots to the head. Nugaev was hurt to the body in the closing moments of the fight, and as he covered his body Shafikov landed the flurry to the head that would act as the catalyst for Reiss’ decision to stop the fight.

So Shafikov was very impressive in his bid for a shot at the IBF lightweight title and I would love to see him against some of the other hardnosed lightweights. Nugaev didn’t win, and got beat up pretty bad, but he did enough to show that he can make a tough and exciting fight with anyone in the lightweight division.

Shafikov has already been beaten by IBF titleholder Vazquez back in February of this year, but because Vazquez is fighting his mandatory Bey next he won’t have to fight Shafikov anytime soon, certainly not right after his fight with Bey, should he be victorious.

Here’s hoping Shafikov gets another fight with one of the other top lightweights in the division before the Vazquez fight, preferably someone with a style similar to his or someone who can match his intensity. A fight with Figueroa makes me very excited.