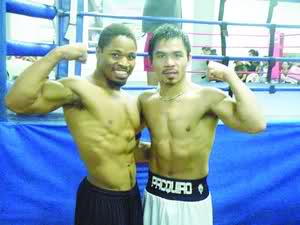 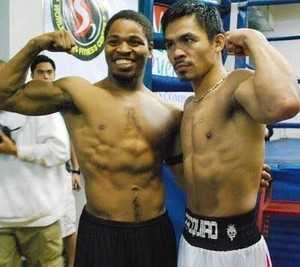 In the wake of recent letdowns surrounding the possible Mayweather-Pacquiao match, welterweight contender Shawn “Showtime” Porter is focused on himself and his upcoming March date with Spike TV.

“I honestly didn’t believe it would happen. When I heard it might happen I was kind of like, you know eyebrows all the way up,” Porter said. “I tried to maintain in myself that I wouldn’t follow it until it’s a done deal you know, so I haven’t really paid much attention to it. But you know I hear through the grapevine, ‘it’s on,’ then I hear it’s not. So I try to stay out of it, and you know, focus on my own thing.”

Many boxing observers share Porter’s frustration, and although it’s a top story, hardcore fans and writers alike are tired of waiting for the announcement of a fight that should have taken place years ago. Porter says he doesn’t follow the negotiations. However, he believes if the two ever did meet in the ring a slight edge would favor Pacquiao.

“I don’t know for me, I think he’s the favorite because he’s a little more versatile than Floyd is at this point in their career. I think Floyd you know, likes to use great defense and counter punch whereas Manny can do a little bit of everything and also from a southpaw position, so another great fight,” Porter said, “And maybe I get the winner.”

“You know going up against a legend such as Mayweather, you can’t pass up an opportunity like that,” Porter explained. “I’ve been told I might get the opportunity then told I wasn’t so you know I’m not sleeping on either of those guys right now, they’re not keeping me up at night but you know I would surely love a fight with Manny Pacquiao or Floyd Mayweather Jr.”

Negotiations between Mayweather and Pacquiao have failed before, however since Porter is a Haymon fighter as well, making that fight would be easier, provided he shows that he is still a top fighter in the division.