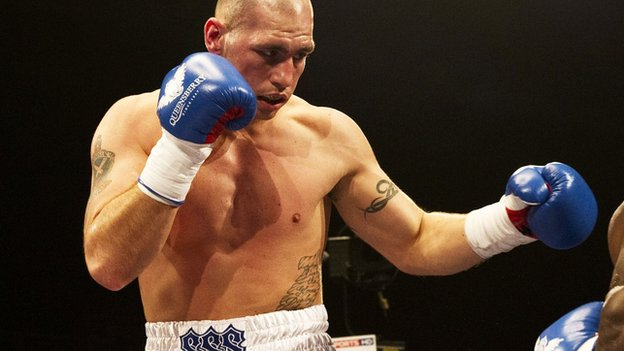 Stephen Simmons says he cannot wait to get stuck into Wadi Camacho and punish him for his online abuse when they meet at the Braehead Arena in Glasgow on Friday June 27, live on Sky Sports – and says he’ll leave him with nowhere to go in his career.

Simmons puts his WBC International Silver Cruiserweight title on the line against Camacho, but there is much more at stake than the title as the bitter rivals finally get the chance to settle their ongoing feud.

The Edinburgh man reacted angrily at a press conference in January to posts made by the Londoner and his friends on social media sites, and Simmons is still spitting over the ‘crude and shocking’ content attributed to Camacho.

“The banter on Twitter started out okay, it was the usual banter and nothing hate-filled, but then he started to get a bit disrespectful and a bit personal,” said Simmons. “He brought my wife into it and I took that quite personally. His mates started superimposing my wife’s face onto these pictures which were crude and shocking but I will deal with it my way come fight night.

“At the end of the day if his friends or fans want to get involved and talk rubbish that is fine, talk rubbish about me. But when it starts getting personal and getting your wife involved, it just isn’t on. Any family members, it is nothing to do with them. It is me that is fighting so leave them out of it and he is going to pay for it on fight night.”

Camacho recalled a time when they pair were pals on a Team GB trip to the States, and while the challenger said that Simmons hasn’t improved, the Scot counters saying that Camacho was not good enough to be part of the line-up and believes this is another step-up that Camacho will fail in.

“We went to America together when I was on the GB squad,” said Simmons. “Wadi wasn’t on the squad, he wasn’t good enough. He came on for a couple of trial camps and came over to America. I was team captain for Great Britain and beat the USA champion twice. Camacho was boxing guys of the same standard as him in his first two fights.

“Then they upped his opponent and he boxed a guy who had reach the quarter-finals of the USA Championships and he got knocked out. I got on well with him, he was alright and got on with everybody. He didn’t talk as much crap as he talks nowadays.

“I have upped my game twice; I boxed for the Celtic title last May and for the WBC International Silver title in September last year against David Graf, a good German prospect who came over unbeaten, and I beat him.

“The two times Camacho has stepped up he lost; first for an English title against China Clarke and then in a British eliminator against Tony Conquest. He goes and makes stupid excuses about coaches and how they got the tactics wrong. It is him in the ring at the end of the day, and if he doesn’t think he is doing the right thing then he should change it.

“I have been hit by guys who have got good power and not even shaken me up, I can take a good shot. His power doesn’t really faze me at all. I will stick to what I do and take all of his negatives and work on them. This will be his third step up and the third he’ll fail in, so once I am done with him, he’s going to have nowhere to go.

“The atmosphere is going to incredible. A lot of people have said it and Eddie Hearn said it himself, Scotland is the best atmosphere in the UK. The Scottish fans celebrate and get behind their boxers and I am looking forward to it and I am expecting a great support. Wadi is going to come into a really hostile crowd.

Camacho and Simmons lock horns on a huge night of boxing in Glasgow as Ricky Burns is gunning for a return to winning ways against the unbeaten Montenegrin Dejan Zlaticanin for the WBC International Lightweight title and as an official eliminator for the World title.