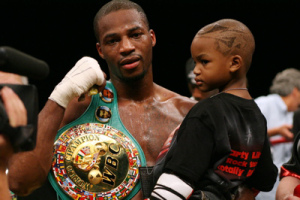 NEW YORK (June 17, 2014) – Can Chad Dawson be “Bad” again? Can the former two-time light heavyweight world champion bounce back from two consecutive knockout losses and look sharp after a one-year hiatus? Can he regain his status in the division he once dominated?

Dawson, 31, relocated to Las Vegas from Connecticut to train and has reunited with former trainer Eddie Mustafa Muhammad. While questions about his career trajectory abound, Dawson still feels there’s much ‘Bad” Chad to be had.

“I’m coming off losses in my last two fights, but nothing’s changed,” said Dawson, who’ll be fighting for the first time since he was on the wrong end of 2013’s Knockout of the Year – a one-punch, 76-second KO against current WBC Light Heavyweight Champion Adonis Stevenson. “I’m just back to being myself. I’m working hard with Eddie and doing the right things. I’ve been training for this fight for about two months.”

Once considered one of the most talented pound-for-pound boxers in the world and the last fighter to defeat Bernard Hopkins, Dawson also owns victories over Antonio Tarver and Glen Johnson (twice each), Tomasz Adamek and Adrian Diaconu. But that was in the past. Dawson’s focus is on the future.

“I’m getting ready for the second chapter of my career,” he said. “I’m back to Bad Chad.”

Blades has won two of his last three outings, the loss coming via fifth-round TKO in his most recent fight last Sept. 28 in Montreal to former WBC Light Heavyweight World Champion Jean Pascal, the first boxer to defeat Dawson.

Breazeale, a 6-foot-7, 28-year-old quarterback at Northern Colorado University, didn’t turn to boxing until he was 23 years old. Despite a late start and limited amateur experience, he was the super heavyweight representative on the 2012 U.S. Olympic Team.

Since turning pro in November 2012, Breazeale has kept busy. This will be his third fight in 2014 and 11th in 19 months. A big, strong boxer-puncher with good skills and movement, he won his first nine fights by knockout, all inside four rounds, until winning a lopsided eight-round decision over veteran Nagy Aguilera on April 3.

“I stayed right in the gym after my last fight,” Breazeale said. “You’ve got to stay on top of it – you never know when you’ll get a phone call. For this fight, I’ve been going through different sparring partners, guys who have been around the game, have a little bit of experience.

“Amateur and pro [boxing] are completely different. I’m a different fighter now. Amateur is all about scoring points and not imposing your will on your opponent. I’m punching with a lot more power now. I’ve always had a ton of power, but power and explosiveness are things I’ve been trying to focus on in this camp.

“One, it’s a crowd-pleaser; two, it makes for a great fight. Usually when you put power and explosiveness together, you end up getting a KO and of course, that’s what I’m always looking for as a heavyweight.”

“Devin took a little break after his last fight (a KO 3 loss to Jason Bergman on March 28, 2014) but he’s been in the gym,” his father/trainer Ray Vargas said, “He’s already at around 224. He’s faster at that weight, but I don’t want him any lower than that against this guy.”

“Devin knows that this is his one shot – he knows it is two Olympians against each other. Like I told him, ‘Listen, you win this fight, a couple more fights, pay your house off.’ That’s the way we’re looking at it. To me, that’s a successful career – if you can pay your house off. He’s got a damn good job.”