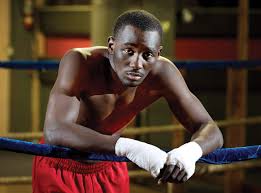 About two weeks ago, Terence Crawford successfully defended his WBO lightweight title against top contender Ray Beltran. Though Beltran came to fight and put on a good performance, Crawford easily dominated the fight to cruise to a unanimous decision win. Before that, he dismantled Cuban sensation Yuriorkis Gamboa in his first title defense. Now Crawford has confirmed he is leaving the lightweight division and heading north to the junior welterweight division. In an interview we had with Terrence he explained to us that the move was strictly done for bigger opportunities and not because 135 pounds was impossible to make. “I still can make it but I think it’s best that I move up for my career. There’s big fights and I feel I could be a lot stronger. My body is still growing and I feel I could be a lot bigger, and it’s a good opportunity for me at 140 pounds.”

One of the big fights that linger for Crawford is the possibility of facing Manny Pacquiao, who has since said after the fight with Chris Algieri, he would head south and drop to 140 pounds from 147, where he has been since 2008. Crawford states he is going to be ready for whoever, and he welcomes that fight with Pacquiao should it present itself. “Of course, if that’s the fight that presents itself then so be it. We’re going to be prepared for whoever, you know, at 140 pounds.” One of the few things that surround fighters when moving up or down in weight is their power. Some fighters carry their power, some gain it, and some very well lose it. Crawford says he feels he is going to carry his power from lightweight up to junior welterweight. “Of course, you know I’m going to show you come that time.”

On the subject of Ray Beltran, whom he defended his title against on November 29th, some thought he had been Crawford’s biggest test. Beltran had previously tried gaining the WBO title when he traveled over seas to fight the then title holder, Ricky Burns. Beltran looked sensational in that fight, even dropping Burns, but did not come out victorious. We asked Crawford if it was safe to say Beltran was maybe the strongest guy he’s ever fought. “Not really, it’s not safe to say that because I had fought some strong guys in my career coming up, you know but to say he was you know, determined, yeah he was determined.” Finally, Terrence gave us an insight on his performance with Beltran, “I give myself a B+, because I saw some things I could have capitalized on and things that I could have done.”