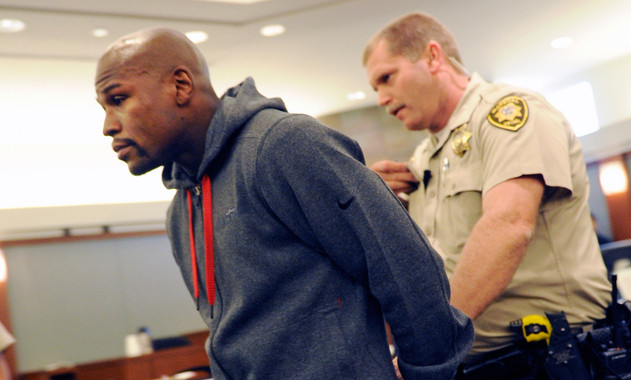 It’s been a long week to say the least after a less then stellar Pacquiao-Bradley  fight on Saturday and it’s undeniably unpopular decision. With all the media hyping up the Pacquiao fight, hardly any attention has been focused on this weekends main event. Enter Andy-Lee vs Julio Cesar Chavez Jr, who have a chance to put on a show that trumps Top Rank Promotions last event and change the foul taste in boxing fans mouths. They could save boxing for at least a week end, oh wait damn the fight is being held Texas. Here we go again. Enough about Saturday’s main event today we hear about why Mayweather was denied house arrest, some great news for Paul Williams, and also some recently signed matches. On today’s Wire Report..Floyd Mayweather Jr is not use to losing his 43-0 record is a testament to that, but yesterday when Mayweather’s lawyers tried getting the champ out the slammer, he got an old fashioned ass kicking. Floyd says he is dehydrated and malnourished, and this is taking a toll on his health and putting his boxing career in jeopardy. Floyd’s lawyers requested that he serve the rest of his sentence for domestic violence under house arrest. Why not it worked for Lindsey Lohan, but this was not the same judge that Ms. Lohan received. This judge Denied all of Mayweather’s claims saying the boxer’s condition is “self-induced as water is made available to [Floyd] twenty-four hours a day.” As for Floyd’s gripe that he’s only consuming a fraction of the calories he needs — the judge says it’s because “[Floyd] chooses not to eat the food provided.” The judge also balked at Floyd’s complaint that he can’t train at a world class level while serving his time — saying, “While the training areas and times provided to Floyd may not be consistent with his prior regimen, he is indeed provided sufficient space and time for physical activity if he so chooses.” And the New……!!!

Now we switch gears and bring you sign of hope, Paul Williams has not severed his spinal cord. Doctors say it is too early to tell if former champion Paul Williams will walk again even though he is able to move himself from his bed to a wheelchair after being paralyzed from the waist down in a May 27 motorcycle accident. Williams, a native of Grovetown, Ga., near Augusta, first won the welterweight title in 2007 with a win over Antonio Margarito, and lost the belt by decision about seven months later to Carlos Quintana. His Sept. 15 fight in Las Vegas against Saul “Canelo” Alvarez has been canceled. Since he’s been using a wheelchair to get around, but promises that one day he will walk again. His doctor added this, “It may be days to weeks before we’ll have a better idea whether he’ll be walking again. Whether he does, or whether he won’t, he will be independent when he leaves here . . . we’ve had patients who’ve had similar injuries to Mr. Williams’ who have walked.” I hope that you have a speedy recovery champ, your a warrior, and your use to fighting.

Former world champions Wilfredo Vazquez Jr., from Puerto Rico, and Rafael Marquez, from Mexico, will collide on August 4 in the show “The War” to be held at the Coliseo Ruben Rodriguez in Bayamon, Puerto Rico, in a PR Best Boxing Promotions (PRBBP) in association with All Star Boxing, Top Rank and Promociones Zanfer, to be televised on Pay Per View. Vazquez Jr. (21-2-1, 18 KOs), a former WBO super bantamweight champion, and Marquez (41-7, 37 KOs), former IBF bantamweight and WBC super bantamweight champion, will fight for the WBO International super bantamweight title.“It’s all set. On August 4 in Puerto Rico, Wilfredo Vázquez Jr. and Rafael Marquez will face for the WBO International title in Puerto Rico in another “war” between Puerto Rico and Mexico. Next week, we will have Marquez in Puerto Rico for a press conference and officially present the fight with the boxers”, PRBBP Vice-President Peter Rivera said. This one is up for grabs guys, both have good boxing techniques. I hope there is still something left in Rafa’s tank because I believe Vazquez Jr is coming out the gates with something to prove.

Unbeaten Orlando del Valle (16-0, 11 KOs) in all likelihood will reappear in September in an HBO fight and the opponent mentioned is none other than former world champion Vic Darchinyan (37-5-1, 27 KOs). Del Valle is ranked fourth by the WBA and WBO at featherweight, but opted to drop to the 122lb division while Darchinyan will rise from bantamweight to super bantamweight.

So there you have it Floyd is going nowhere, Paul Williams may walk some day in the future, Vazquez Jr will face Rafa Marquez, and Orlandito steps it up by facing a Raging Bull. That’s all for today’s Wire Report, Remember to check out our Live show on BlogTalkRadio.com/ThaBoxingVoice on Thursdays and Sundays 7-9pm
Join the Revolution, and Follow @number2snake on Twitter.