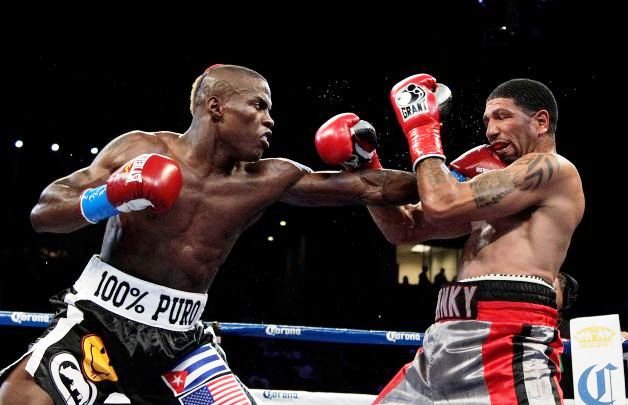 Quillin slept on the floor of his friend’s apartment in Manhattan and worked three jobs in order to keep his dream of becoming world champion alive. The gifted Cuban-American will have that coveted opportunity on Oct. 20, ironically, where it all started in New York City, at the new Barclays Center in Brooklyn.

Technically speaking, Quillin’s life story started in Chicago, where his father, Pedro, relocated after defecting from his native Cuba to Miami. His family moved six months after Peter’s birth in 1983 to Grand Rapids, Michigan. Pedro, who was on the second to last Cuban refugee boat, was rarely at home and he was later extradited from Orlando (FL) to Illinois and eventually imprisoned for money laundering.

Quillin’s mother immediately was forced to go on welfare in order to care for her three children. “I always had clean clothes but they weren’t the kind I really wanted, mostly shared with my brothers,” Quillin explained. “I had no confidence as a kid. I went to school and didn’t know why I didn’t have what other kids had. I didn’t understand that they didn’t have much, either. It was just a way of life in the inner city. We struggled growing up in Grand Rapids and by the time I was a teenager, I was uncontrollable and running on the streets. A lot of kids didn’t have their dad living with them. Friends were murdered or jailed.”

Boxing, like for so many other troubled teens, was a way out for Quillin, who started in the sport at the age of 15. He was in and out of the gym, though, undisciplined and didn’t have his first amateur fight until he was 17. At 18, he decided to get serious about boxing. With his $300 life savings stuffed in his pockets, he and his trainer headed to New York City, where he competed in the famed NYC Golden Gloves. He first lived on 88th and Amsterdam in Manhattan, in an apartment of his trainer’s friend. Things didn’t work out between “Kid Chocolate” and his trainer and Quillin soon had no place to live, no family in New York, and he was left crying by himself on a train heading from the Bronx to Manhattan.

Quillin had briefly lived on the Lower Eastside, then in the Bronx, over to the Financial District (his co-manager John Seip hooked him up there with an apartment), and then to Brooklyn for four years. Today, he’s bi-coastal, living in Manhattan between fights, and in Los Angeles while training.

“I don’t really know why I didn’t give-up but I think it was because of God,” Quillin remembered. “I try not to question why but I wouldn’t give up and worked through all the BS to get where I am today. I moved to Brooklyn because it reminded me more of home than Manhattan. I slept on the floor of my friend Steven Rivera‘s home. He believed in me. I thank God for the special people in my life that I’m indebted to like my manager, John Seip (who co-manages Quillin with Jim McDevitt). They’ve encouraged me. God got me into boxing for a reason. I’m just getting to the point now where I always wanted to be. It’s all been worth it.”

It certainly hasn’t been an easy road for Quillin to follow and get where is today. Although it never got to the point where he considered quitting boxing, he was forced to work three jobs to survive, earning $350-$500 a week at IHOP (“My personality helped me earn extra money there.”), $100 a week doing administrative work for a friend, and additional coin teaching conditioning classes.

“I’d work three jobs and then go workout at the gym,” Quillin noted. “I didn’t sleep. Faith is everything. God has been good; He challenged me. Some may question why I have the work ethic I do and I owe that to God. I’ve learned that, if you really want something, you need to work at it. I’m still learning about boxing and I put everything into it. My work ethic is even better today, even if it just looks easier. Boxing is my job, boxing is my life.”

From the mean streets of Grand Rapids to Brooklyn and a world title shot Oct. 20 there reads like a Hollywood script. There just may be a “Kid Chocolate” movie someday, especially if he leaves the ring wearing the WBO championship belt around his waist.