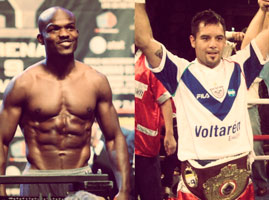 Timothy Bradley (31-1, 12 KOs) is one of the most determined fighters in the sport of boxing. He has shown the ability to go toe to toe with the very dangerous Ruslan Provodkinov, and outbox the very crafty Juan Manuel Marquez. Coming off a loss against Manny Pacquiao he wants to rebound with a victory against the very underrated and dangerous Diego Chaves (23-2, 19 KOs).

Chaves is a typical power punching aggressive fighter from Argentina with good boxing skills. Chaves who is also coming off a loss, is very determined to take full advantage of being part of a headlining fight on HBO once again. Both fighters are looking to make a statement this Saturday night in the Cosmopolitan of Las Vegas.

The 2 ½ reach advantage for Bradley will play dividends given the fact he will try to establish his jab, and outwit the dangerous Chaves. Bradley leading up to the fight explained he would not be fighting Chaves the same way he fought Ruslan Provodkinov. He plans to outbox the power punching Argentinian fighter.

Along with trying to out box Chaves from a distance, Bradley will also strive to sneak in a few shots on the inside. Since Bradley tends to keep his head low while throwing combinations on the inside, his smaller height is actually an advantage for him in this fight.

Bradley has never been known as big puncher, but has enough to grab the attention of Chaves. It is very unlikely he will be able to knockdown or knockout Chaves at any stage of the fight.

As far as his chin goes, he’s definitely proven to have a solid one. He can withstand a couple of clean shots from Chaves, but not too many because any man can go down when facing a power puncher.

Chaves is a very strong puncher. He is certainly capable of knocking down or knocking out Bradley if he can land a multitude of shots.

Chaves also has a sturdy chin. He should be able to stand on his feet throughout the entire fight against a fighter like Bradley.

One of Bradley’s most useful tools in his arsenal is his speed. He will come in as the slightly faster fighter, which will help him outpoint Chaves in the center of the ring.

Chaves also has decent speed, and should be able to keep up with Bradley. He is slightly slower, but not by a landslide.

Bradley’s most important punch in the fight will be his jab. Bradley uses his jab often to negate his opponent’s offense, win rounds based off activity, and set up his own offensive attack.

Bradley also tends to win rounds on spurts that normally arise on the inside. When fighting in the pocket, if Bradley doesn’t get into a defensive posture he sometimes throws a quick flurry then immediately backs away thus getting the better of the exchange and winning the round.

Bradley is also a very good counterpuncher due to his fast hands. He is a very reactionary fighter, who can capitalize on Chaves’ tendencies of lunging when he tries to land body shots from a distance, and also take advantage of any of Chaves’ defensive lapses.

Chaves is a very good combination puncher. He does a very good job mixing it to the body and the head. Chaves does not mind getting into exchanges, and if he manages to draw Bradley into a firefight it would be a big advantage for Chaves.

Chaves is also a very active fighter in close quarters. He will try to limit Bradley’s success in spurts by punching with his opponent. It also helps that Chaves is a very good counterpuncher who can take advantage of any reckless mistakes Bradley makes in the ring.

Chaves will try to land big uppercuts whenever Bradley weaves his head to duck under punches. He will also use his stiff jab to try and set up his combinations. The only issue with Chaves is, he has a tendency to lunge in when trying to land shots from the outside, which will leave him susceptible to counters.

Bradley is a very good defensive fighter when he wants to be. As discussed earlier Bradley said he would not be approaching the Chaves fight in the same manner as he did Ruslan Provodkinov. Bradley will probably display the same defensive skills as he did in his bouts against Juan Manuel Marquez, Nate Campbell, and Luis Carlos Abregu.

Bradley does a great job of always being defensively aware. Bradley has shown the ability to use good lateral movement, subtle defensive footwork to avoid shots, great waist movement, and knows how to smother his opponent’s punches on the inside.

When Bradley throws his combinations he does a very good job of staying low, and being consciously aware of any returning fire.

Chaves is a very underrated defensive fighter. He may not be as defensively aware as Bradley after throwing combinations, but he does a good job of remaining defensively responsible.  He does a good job of maintaining his glove next to his ear while throwing body shots, he knows how when to step back to avoid punches, and has a really good Philly Shell defense.

Despite showing good signs of defensive skills, he does have defensive lapses when he over reaches to land a punch on the outside, or when he remains stationary trying to draw in his opponent into an exchange which sometimes works, but leaves him vulnerable to a fighter who knows how to punch and slip away from any return fire.

Since Bradley does duck his head low at times while getting into exchanges on the inside, and Chaves tends to throw body shots while remaining low in an exchange, a head collision can become a factor in the fight.

Bradley should win by unanimous decision if he fights the right fight. Bradley will have to use his jab, lateral movement, and countering abilities to be able to outpoint his opponent. It will not be an easy day at the office given the fact Chaves is a skilled and dangerous opponent. Bradley will have to rely on his intelligence and experience to outpoint the Argentinian fighter.