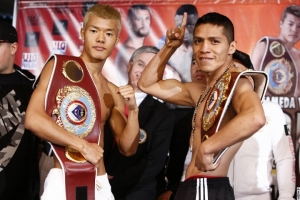 In the anticipated co-main event of the November 1st Showtime boxing broadcast, bantamweight champion Tomoki Kameda (31-0, 29 knockouts) was set to defend his title against Alejandro Hernandez (28-11-2, 15 knockouts). Normally relegated to Internet streams or non-televised portions of pay-per-view cards, Kameda knew he had to take advantage of his opportunity with Showtime. As a dominant but unknown fighter to most main-stream audiences, Kameda would have to prove that he is a champion worth following.

Kameda was in complete control of the fight for a little more than six of the first twelve rounds. Against Kameda, Hernandez seemed gun-shy as he failed to really set up any significant kind of offense against the champion. It wasn’t until about the eighth round when he really began to let his hands go and make things a bit more competitive for his opponent. Hernandez was undeniably successful when being more active, but after a couple of rounds Kameda adapted and regained control of the momentum.

The champion was hitting Hernandez with clean blows often, but Hernandez never seemed hurt. In the final two rounds Kameda appeared content to cruise to the decision, and understandably so considering the clear gap in talent between the two fighters.

Following the twelve rounds of action and the all-action style of the champion, what may ultimately prevent Kameda from clicking with American audiences is the clear lack of power shown against Hernandez. Only time will tell whether Kameda is able to grow as both a fighter and icon, but what is clear is that there is still work to be done for the young champion.