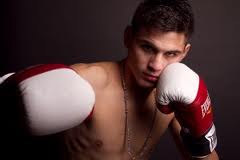 “I feel very blessed to have the team that I have around me and that Top Rank will make my team even stronger,” said Ramírez.  “I feel I’m in great hands with Top Rank and they care about their fighters.”

“We are ecstatic to sign Jose Ramírez to a promotional contract,” said Arum, Top Rank’s founder and CEO. “We considered Jose to be the leading prospect among the fighters comprising the U.S. Olympic Boxing Team.”

“After structuring one of the most complex and detailed agreements, we are thrilled to include the premier 2012 U.S. Olympian to our Top Rank stable,” said duBoef, president of Top Rank. “We have followed Jose’s highly-decorated amateur career and look forward to paving and developing a path for his professional career.”

“I am excited about our relationship with Top Rank because they believe in Jose and they have faith that Jose will excel in the sport,” said Armando Mancinas, coach and co-manager of Ramírez.  “Their history of developing fighters should prove beneficial for Team Ramírez.”

“After countless meetings, months of research and preparation it was decided that as Top Rank raised boxing’s superstars in the past that they are poised to do the same with the next generation of the sport’s elite,” said Rick Mirigian, Ramírez’s co-manager and deal agent. “The structure, stability, partnerships and experience To Rank has in place is second to none. They stepped up and showed they share the same belief in Ramírez as we do and historically they don’t just sign anyone as they deal in quality, not quantity. I look forward to working close with them to create the sport’s next superstar and usher in a new generation of boxing.”

“Jose’s fan-friendly style of fighting – always on the attack and throwing lots of punches – is a perfect fit for Top Rank,” said Hall of Fame matchmaker Bruce Trampler.  “We have very high expectations for him.”