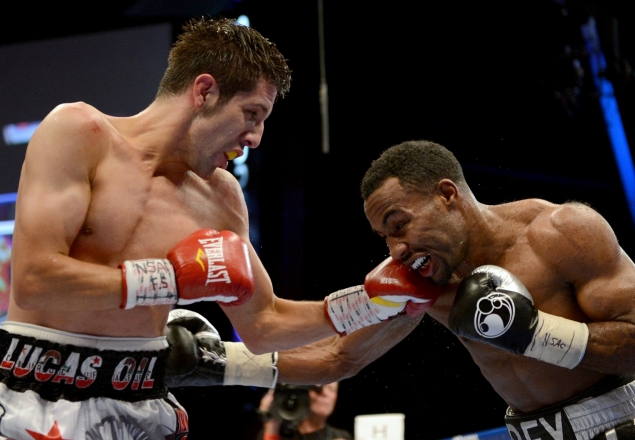 SHERMAN OAKS, CA (October 24, 2013) – In his last fight against unbeaten Cleveland native Mickey Bey back in July of this year, Covina, Calif. lightweight John Molina Jr. looked like he may have trouble with the faster and accurate punching Bey.  That presumption became more evident as the rounds went by.
Although Molina was able to land one hellacious shot after another.  Bey was just as able to withstand them through the first nine rounds.  It wasn’t until the 10th and final round Molina unleashed a series of these dangerous blows that put Bey into another hemisphere and provided Molina with the win and a “Knockout of the Year” candidate.
In a non-televised bout, Molina now has been added to fight in a 8-round bout underneath Andre “S.O.G.” Ward who will put his world titles on the line against the undefeated Edwin “La Bomba” Rodriguez (24-0, 16 Kos) in a scheduled 12-round World Championship main event on November 16 at the Citizens Business Bank Arena in Ontario, California, which will be televised live on HBO World Championship Boxing® beginning at 9:30 p.m. ET/PT.

Molina (26-3, 21 KOs) has an extraordinary ability to hurt men with his fists.  Fans, trainers, promoters, networks and virtually every other living creature walking the earth crave the same thing from their fighters, big knockouts.  He possesses something most men do not and as Bey found out, he will use every last second to do harm to you with his fists.  Molina is now looking for redemption earning another shot at the championship knowing he carries natural destruction in his hands to achieve the title.

In baseball, the great equalizer is a home run.  In football, the touchdown pass does it.  In boxing, it’s the knockout.  It can turn the worse case scenario in a blink of an eye.

Joe Goossen, Molina’s trainer, believes the confidence and experience, combined with Molina’s extraordinary large size for a lightweight, will bode well for Molina as he uses his willpower and heavy hands to reach the world championship pinnacle.

The superb non-televised companion bout to the Ward-Rodriguez main event will be Ward stablemate, world rated super middleweight Brandon Gonzales (17-0-1, 10 KOs) of Sacramento, CA who will bring his undefeated record to Ontario in a 10-round bout against another undefeated fighter in Jonathan “Country Boy” Nelson (19-0, 9 KOs) from Little Rock, Ark.  Trained by Virgil Hunter, Brandon’s last bout televised by HBO, and first scheduled 10-round fight, against Thomas Oosthuizen (21-0-2, 13 KOs), Gonzales had to settle for a disputed draw against the heavily favored South African world contender, although Gonzales was the aggressor from the outset and appeared to be the clear winner at the end of the bout.

Nelson’s uncle and trainer Ozell Nelson who guided the career of Nelson’s friend and mentor, former world champion Jermain Taylor and the one responsible for his nephew’s entry into boxing believes Jonathan has the ability to become a world champion. Said Jonathan, “I know that a lot of people – since Jermain Taylor and I have the same trainer – like to say there’s a lot of similarities in our fighting styles.  If I see an opening, I take it.”

After falling short of qualifying for the Olympics, one of the amateur distinctions Nelson has going into this bout with Gonzales is he holds a points win (13-6) over Brandon in a 2006 contest.

As for the other Molina on the non-televised card, no relation to John, the 2012 Mexican Olympic boxer Oscar Molina, who made his professional debut back in January — and has won all six of his bouts to date, five by KO — will add to his busy inaugural year as a pro by fighting in a 6-round bout against Carlos Sanchez (5-4, 1KO).

Currently, the 23-year old native of Chihuahua, Mexico who grew up in Norwalk, CA, is preparing at the Maywood Boxing Club for his bout.  Oscar Molina and twin brother Javier Molina (14-1, 6 KOs) are both former Olympians in boxing; though four years apart and for different countries.  Javier represented Team USA in the 2008 Olympics in Beijing, whereas Oscar represented Mexico in the 2012 Olympics in London.

Oscar made his professional debut on January 26, 2013 in Chihuahua, Mexico, where he won a four-round unanimous decision over Hector Mendoza.  Since then, Oscar has been extremely active, stopping all five of his next opponents.