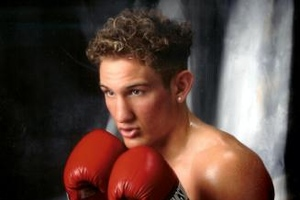 On Saturday, February 9, Brooklyn’s own Danny “Miracle Man” Jacobs continues his phenomenal comeback following his successful battle against cancer with a 10-round middleweight bout against rugged Billy Lyell that will be featured live on the SHOWTIME EXTREME telecast at 7:00 p.m. ET/PT (delayed on the west coast) from New York’s newest home for world-class fight action, Barclays Center in Brooklyn, N.Y.

“We are so thrilled that Danny Jacobs is getting back in the ring for the third time in less than five months,” said Oscar De La Hoya, president of Golden Boy Promotions.  “Billy Lyell is going to do what he can to put an end to Danny’s undefeated comeback streak, but the ‘Miracle Man’ will be hard to stop.”

Following a harrowing, but victorious fight against cancer that kept him out of the ring for over a year, Brooklyn’s Jacobs (24-1, 21 KO’s) returned on October 20, 2012 at Barclays Center and scored an emotional first round knockout victory over Josh Luteran.  In December, the 25-year-old Jacobs made it two for two in his comeback when he halted tough Chris Fitzpatrick in five rounds and will seek a similar result in his next bout at Barclays Center against Lyell.

A 10-year professional hailing from Warren, Ohio, Billy Lyell (24-11, 5 KO’s) is a gritty competitor who always shows up to fight when the bell rings.  Willing to fight the best competition available at the drop of a hat, Lyell has been in the ring with Julio Cesar Chavez Jr., James Kirkland, Yory Boy Campas and Vanes Martirosyan.  He owns a 2009 victory over John Duddy in which he handed the Irishman his first professional loss.  A former world title challenger, look for the 28-year-old Lyell to be in Jacobs’ face from start to finish on February 9.

Garcia vs. Judah, a 12-round bout for Garcia’s Unified Super Lightweight World Championship, is presented by Golden Boy Promotions and supported by Golden Boy Promotions sponsors Corona and AT&T.  In the co-featured attraction on SHOWTIME CHAMPIONSHIP BOXING, WBO Middleweight World Champion Peter “Kid Chocolate” Quillin puts his title on the line against hard-hitting Fernando Guerrero in a 12-round fight.  In fights featured on SHOWTIME Extreme, boxing’s most inspirational fighter, Brooklyn’s Danny “Miracle Man” Jacobs faces veteran Billy Lyell in a 10-round middleweight bout and Brooklyn’s Dmitriy Salita faces Hector Camacho Jr. in a 10-round junior middleweight fight.  The SHOWTIME Championship Boxing telecast begins live at 9:00 p.m. ET/PT (delayed on the West Coast) with preliminary fights to air live on SHOWTIME Extreme at 7:00 p.m. ET/PT (delayed on the West Coast).