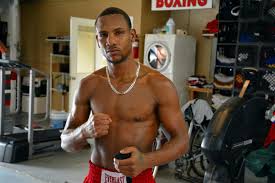 MIAMI (August 5, 2014) – “The Matrix,” world-rated featherweight Claudio Marrero (15-1, 11 KOs), has to be seen in order to truly appreciate his tremendous athleticism in the ring. The dynamic Dominican returns to the ring this Friday night in Pittsburgh in an eight-round bout against former World Boxing Council (WBC) FECARBOX champion Felix Perez (8-6, 3 KOs), of Puerto Rico.

“He is a very elusive, aggressive southpaw who can pick apart his opponent, counter-punching from the outside,” Marrero’s manager/head trainer Herman Caicedo described his 25-year-old fighter’s style.   “He uses his jab and effectively cuts-off the ring. He’s learning how to not complicated things, even with his style he doesn’t have to avoid every punch, and he knows he has to sit in the pocket more to be even more effective.”

Marrero learned a valuable lesson August 23, 2013 at Turning Stone Casino, when he suffered the first and only loss of his professional career by way of a close 12-round decision (116-111, 115-112, 114-113) to Jesus Marcelo Andres Cuellar (22-1) for the Interim World Boxing Association (WBA) featherweight title.
In retrospect, the then 24-year-old Marrero had only 14 pro fights under his belt, and the quantum leap into a world title fight, even an interim, was somewhat premature. “Maybe it was a bit premature,” Marrero admitted, “but at the end of the day, it was a world title fight opportunity. It just wasn’t my night but that loss has made me a better fighter. I’ve never been egotistical, always a humble man, and that fight humbled me more and I’m a bigger man today because of it. I learned that I have to be 100-percent at my best to win a big fight.”
Marrero has a rich amateur pedigree, finishing with a sterling 297-12 record and, at the tender age of 17, he lost by a mere single point to two-time Olympic gold medalist and reigning unified world bantamweight champion, undefeated Cuban great Guillermo Rigondeaux, in an amateur bout held in Havana.
Training the last four years in South Florida has provided Marrero with invaluable sparring sessions with Rigondeaux and another Olympic gold medalist from Cuba, Yuriorkis Gamboa, also a multiple world champion as a professional.
“Everybody benefits from that sparring, not just me, but probably me more than anybody,” WBA No. 6-rated Marrero explained. “I fought ‘Rigo’ in the amateurs and have had more than 100 rounds sparring with both him and Gamboa. I’ve gained a lot more confidence in my skills having sparred with them.”
Caicedo. who also manages and trains undefeated bantamweight Juan Carlos Payano (15-0, 8 KOs), a two-time Dominican Olympian scheduled to challenge WBA Super bantamweight Anselmo Moreno on September 26, believes Marrero is special because of his unique talent as well as the sacrifices he has made.
“I think he needs two or three more wins and then he’s in position for another world title fight,” Caicedo remarked. “The fight he lost was a little premature – he was still a baby in boxing – but the opportunity arose and we took a shot. He learned a lot and he’s on his way back to the top.
“Claudio is very reserved. He deeply cares about family, especially his wife and three-year-old son. He is very dedicated, driven, and willing to do whatever it takes to be world champion. Look at what he’s sacrificed the last four years, leaving his family in the Dominican Republic to train here. He only gets to go home once or twice a year. It’s a lot easier for other guys to sacrifice when they go home every day after training. He lives in the gym; always happy and training hard.”
A Dominican brotherhood among boxers has helped Marrero better deal with separation from his family, in addition to him living in a foreign country in which he doesn’t speak its native language, English.
“I believe there is a strong brotherhood of Dominicans who support each other worldwide in professional boxing,” Marrero concluded. “I admire Joan Guzman for breaking away from the Dominican to accomplish all he has in boxing. I’ve oftened looked to him for advice.”
Tweet