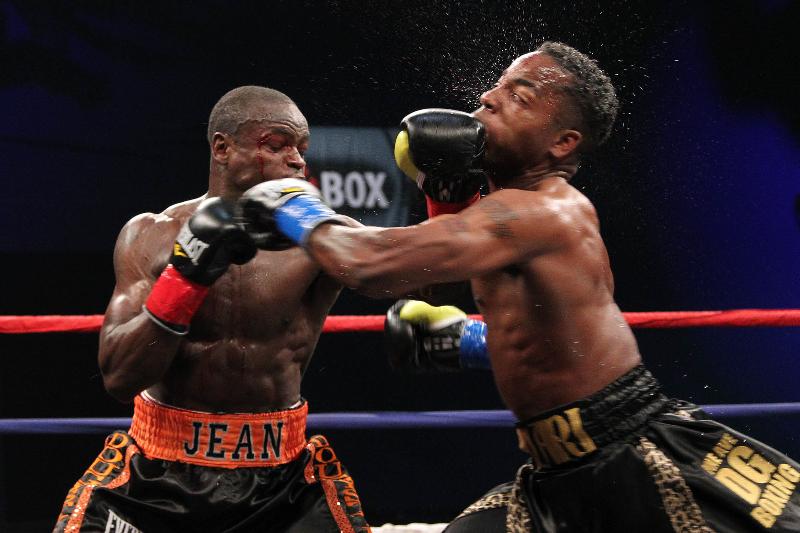 “In that dream,” Jean noted, “I was a very good fighter.  Now, I’m following a new dream to be world champion.  It’s my time!”

The 31-year-old Jean moved with his family to Canada from Haiti when he was 10. Disinterested in boxing until the experiencing the aforementioned vision when he was 18, Jean went on to become a Canadian National Champion as an amateur, and presently he’s unbeaten in 25 professional fights.

Fighting this past May for the second time outside of Canada as a professional, the Montreal-based boxer dismantled the then IBF No.7 ranked Cleotis “Mookie” Pendarvis (17-3-2) on ShoBox: The Next Generation, live from Buffalo Run Casino in Miami, Oklahoma.  Jean overcame a nasty cut over his right eye, suffered in the third round from an unintentional head-butt, rocking Pendarvis in the fourth with an explosive overhand right.  Pendarvis somehow managed to beat the count but the IBF title eliminator fight was soon stopped by the referee with Jean unloading a barrage of unanswered punches.

“My last fight was huge for me, enormous, because I knew that it would change my life,” Jean said.  “People have been saying ‘Douggy” is next but I needed to prove it.  I went to another country and to knockout Pendarvis early in the fight was good.”

When Jean challenges Peterson, he will be in the unusual position of not only fighting a world champion coming off a loss, but one who was dropped three times in the process before the action was finally halted in the third round.  His fight against powerhouse Lucas Matthysse (33-2) on Showtime Championship Boxing was originally supposed to be contested for Peterson’s IBF belt, however, Matthysee refused to relinquish his Interim World Boxing Council (WBC) belt. A unification bout was disallowed and instead they fought a non-title fight.

“I will take advantage of that (Peterson’s last fight),” Jean said.  “He will be weaker.  Peterson’s a good fighter. I can’t take anything away from him, but I know I’m a good puncher with 17 knockouts in 25 fights.  I’m going out to stop him.

“He doesn’t compare to anybody I’ve ever fought but I know I’m in his class.  He can put pressure on and box, but he didn’t use the right strategy in his last fight, and I don’t think he will against me.  I don’t think he’ll have any respect for me. He’s going to come after me but I will make him pay. He’ll taste my power and then I’ll knock him out.”

“Guy Jutras is one of the most knowledgeable people in boxing,” Jean’s promoter Camille Estephan (Eye of the Tiger Management) commented. “After Dierry’s fight with (Ivan) Cano for the NABF and NABA titles (October 26, 2012), Guy said to me that he’d been in the business a long time, as a fighter and judge, and that he’d never seen a more natural fighter than Dierry Jean.  He said Dierry was the best pound-for-pound fighter in Canada and one of the best he’d ever seen in over 50 years.  For him to say that means a lot and it’s true. Dierry’s talent is non-parallel with anybody in Canada.

“All of the top 140-pounders should take notice.  Dierry has been slowed down by a few injuries, which is why he hasn’t been on the big stage.  He opened a lot of eyes in America, all of boxing, with his last performance on ShoBox, knocking out Pendarvis.  Dierry Jean is bringing a lot of excitement to an already loaded division with the likes of Matthysse, (Danny) Garcia, Peterson, (Amir) Khan, (Mike) Alvarado, (Brandon) Rios and (Zab) Judah.”

The IBF will send a letter to the promoters of Peterson (Golden Boy Promotions) and Jean (Eye of the Tiger Management) on September 23, 2013, asking the two parties to negotiate a title fight between the two fighters.  If no agreement is reached within one month a purse bid will be held.

“We have been talking with Golden Boy but I don’t know where it’ll go,” Estephan explained.  “We’d love to bring the fight to Canada.  Jean is the best pound-for-pound fighter in Canada and one of the best in the world.  He must prove that, though, by winning a world title.  No longer is he one of boxing’s best kept secrets and, after the fight with Peterson,   his star will shine brightly all around the boxing world.”