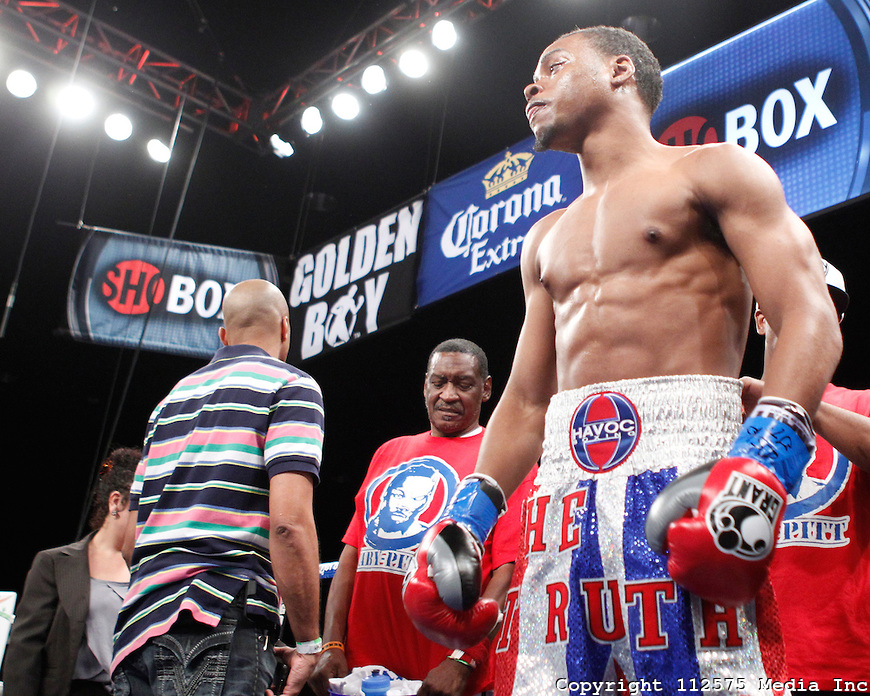 Undefeated Errol Spence, Jr. didn’t lose a round and may have made the transition from prospect to contender in a dominating unanimous decision victory (100-90 three times) over the durable Ronald Cruz in the main event of ShoBox: The New Generation on SHOWTIME® from The Joint at Hard Rock Hotel & Casino in Las Vegas.

Spence (13-0, 10 KOs) was remarkably efficient with his power punches, landing 282 shots compared to Cruz’s 65 at a rate of 58 percent. Looking like a potential future world champion, the 2012 U.S. Olympian was technically sound and sharp with his punches, picking apart the courageous Cruz (20-4, 15 KOs) as he went past the eighth round for the first time in his career. Conditioning certainly wasn’t an issue for the 24-year-old, who threw more punches in the 10th and final round (114) than he did in any other round in the fight.

“After this fight, I learned that I can go the full 10 rounds and sustain my energy for all the rounds,” Spence said. “I blocked, banged, threw the punches, stayed composed, and stuck to the game plan. I came into this fight in great condition and I can attribute that to a great training camp.

“I honestly thought I was going to knock him out in the sixth or seventh, but he’s tough and he came to fight. I’ve seen his fights before and he always comes in with a lot of pride.”

Fighting a southpaw for the first time, it was impressive the outmatched Cruz made it to the final bell with the amount of punishment he was taking. He suffered a cut over his left eye due to accidental headbutt in the second round and another cut over the right eye from a punch in the seventh.

“I don’t know what went wrong in there. It was hard to see out of that eye from the cut and he kept landing that straight left. I didn’t want them to stop the fight because I still thought I had a chance.”

“For the entire fight, we had nothing but glowing praise for Spence to the point where I felt compelled to think of a negative and I was stumped,” Farhood said. “He’s good technically, he’s mature, and when you throw 114 punches the first time you’ve ever seen the 10th round nobody can question his condition either. Spence will be a contender soon and he’s a star in the making.”

Wade (16-0,11 KOs), who went past six rounds for the first time in his career, was relaxed and controlled the pace from the opening bell. His speed and efficiency was the difference, as he kept Brinson (16-2-2, 6 KOs) at a distance and consistently landed power shots and combos with ease. Wade slowed a bit in the later round as he entered previously uncharted waters, but he fought carefully, kept his distance and didn’t allow Brinson to disrupt his game plan.

“I am happy with the way that I fought tonight,” said Wade, who looked tired but unscathed. “I felt good and strong in the ring. I have been training to go the distance and I wasn’t looking for a knockout.

“Brinson has an awkward style but I executed my routine and plan and it worked out in my favor. I kept my left hand low because I was worried about him coming up on top of me. Overall, I am proud of my performance.”

After losing his first 10-round fight and coming back from the second-longest layoff of his career (8 months), Brinson was disappointed by the result.

“I started a little slow tonight,” Brinson said. “He clearly won the first three rounds, but I felt like I came on strong in the middle rounds, especially with the body shots.

“I was the aggressor towards the end of the fight. I felt like maybe it was a draw, but the judges’ didn’t see it that way. I gave it my all and sometimes it just doesn’t fall in your favor.”

While not overly impressed with his performance, Farhood thought it was a valuable learning experience for Wade.

“It was a big step up for Wade and I thought that he responded reasonably well,” Farhood said. “He shined in the first half of the fight, decelerated a bit in the second half, but going the 10-round distance for the first time is a huge step for someone who had fought as few rounds as he had.”

In a non-televised bout, undefeated light heavyweight and 2012 U.S. Olympian Marcus Browne (11-0, 8 KOs) scored a first-round TKO against Donta Woods (8-3, 7 KOs) in a fight that lasted just 91 seconds. Browne was originally scheduled to oppose Yusaf Mack (31-7, 17 KOs) on the ShoBox telecast but the fight had to be canceled after Mack failed a pre-fight blood test.

Highlights of Browne’s fight against Woods were shown between rounds of the co-feature fight as Browne was interviewed by Farhood.

“We worked hard in this camp and it paid dividends,” Browne said. “I’m starting to get comfortable and starting to get in groove. I’m young in the sport of boxing and I’m here to stay for a long time.”

Erislandy Lara, who faces Canelo Alvarez on SHOWTIME PPV® on Saturday, July 12, at the MGM Grand in Las Vegas, was interviewed before the main event to talk about the biggest fight of his career and the influence that social media had on making the showdown a reality.

“I’ve never been in a big fight like this, but thank God I’m able to control myself and deal with the cameras and the press and everything that comes with it,” Lara said. “I used social media to challenge him. I knew the fans and the press would respond to that and that’s how I got the fight.

“Supposedly they say he’s the best at 154 pounds, but I think I’m the best. I think it’s a good thing that the best are fighting the best.”

As ShoBox approaches its landmark 200th telecast next month, former IBF light middleweight champion, Ishe Smith, who appeared on the series five times, was interviewed by Farhood and asked about the impact ShoBox has had on his career.

“This series means everything to my career,” Smith said. “I started in 2002 and it’s just been a blessing to main event ShoBox four times. I went 4-1 on the series and watching Errol Spence take on a tough fighter this early in his career reminds me of when I fought David Estrada when I only had 11 or 12 fights.”

Friday’s fights will replay on Tuesday, July 1 at 9 p.m. ET/PT on SHOWTIME EXTREME and will be available on SHOWTIME ANYTIME and On Demand through July 25.