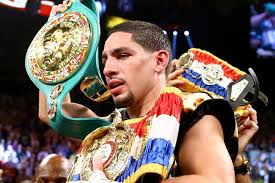 “Come August 9th it’s going to be another great performance by me. I feel like I’ve got a lot to prove. I’ve got to show the world why I’m the unified super lightweight champion of the world.

“I’m already training hard in the gym every day and running the hills. If the fight was next week I’d be ready, I’ve just got to lose a few more pounds.

“Danny Garcia has a lot to prove. August 9th, I have to go in there and show him [Rod Salka] that I’m the best fighter in the world.

“August 9th is going to be a classy performance, but ugly for my opponent.”

“Danny is training hard right now, there’s a great camp going on. He’s going to come in, destroy and conquer.

“Salka can try to come in. He can work hard, but don’t look at the Herrera tape because you’ll get confused. Danny Garcia is a chameleon.

“Just because Danny had an awkward night doesn’t mean it’s going to happen again. He’s going to come in to destroy and conquer.”

“I’m coming to work. I’ve been working really hard, and my whole boxing career I’ve worked to put myself in position to fight for a championship or a title.

“In this country, thank God, if you’re willing to work hard and bust your butt then the opportunities will present themselves. Opportunities always look a lot like hard work in my opinion.

“So I plan on busting my ass, working hard in the gym. I’m living there now, and I’m going back there tonight. We’re going to give Danny Garcia all that he can handle on August 9th.”

“I just want to say that I’m happy to be fighting in New York. It’s my first time fighting here, so I’m excited. I’m training hard, and we’re going to put on a good fight.

“I’m expecting for him to have a big crowd since this is his hometown. But I’m pretty sure D.C. is going to show up and show out that night. I’m just looking forward to the fight and you all should expect a good one.

“This is my first time fighting in New York City and just knowing that all the greats fought here and it’s a big honor for me and go in and maybe give half of what those old guys used to do.

“I know he [Edgar Santana] will come in prepared. I know Edgar Santana can fight. He can hold his ground against anyone.”

“First of all, I’d like to thank Lamont for giving me the chance to fight for the world title. I’m grateful to be here. If you follow my career, you know I’ve had some fallbacks. I’ve been chewed up, swallowed and spit back out by the streets, but I’m here.

“Finally, the “Miracle Man” has come back to Barclays Center! It feels great to be back in my hometown where I was born and raised and to have an opportunity to fight for a world championship here.

“I want to thank my opponent for accepting this fight because he’s coming from Australia to Brooklyn to fight in my back yard. It says a lot about that fighter and the man that he is, and I applaud that.

“I remember being on my death bed, and I found our in the newspaper that the Barclays Center was opening and that they were going to have fights here. And me not knowing if I would ever be able to box again, let alone perform here…to be standing here in front of you guys and say that I’m fighting for the WBA championship of the world is awesome!

“I also want to say that I represent more than just the sport of boxing. I’m a true gentleman of the sport, and it takes guys like myself, Oscar and other guys who represent the sport well to continue to take this sport to another level.

“I just want to say thank you guys for all of your support that you’ve given me. It will definitely be the start of something epic. I appreciate you guys and God bless you all.

“This means the world to me, to have the opportunity to fight for a world championship and to win it in my backyard with my fans and my family here. It’s an opportunity of a lifetime.”

“I’m training like a champion and come August 9th I will be a champion.”

“SHOWTIME has an unbelievable commitment to airing incredible boxing and the August 9show is no different and we’re very happy to be a part of it.

“I’ve been lucky enough to come to quite a few events at Barclays Center and I’m excited to be a part of this event.

“Daniel Jacobs is a great sportsman and a terrific guy, unfortunately I happen to be representing the guy going against him.

“I could stand here for an hour and talk about his credentials. He could not be happier about this opportunity to fight in New York in Daniel Jacobs’ hometown, but that’s what you have to do if you want to be a champion.

“I’m looking forward to August 9and as Oscar said, the real winners are going to be the fans.

“I’m very excited about the card. We have a lot of great fighters. I want to thank Golden Boy, SHOWTIME and Barclays Center for making the fight in my hometown.

“It is a pleasure to be back at the Barclays Center where we have seen that boxing is alive and thriving in Brooklyn. August 9th we have three world title fights with three of the most talented and beloved fighters today.

“Danny Garcia has beaten some of the biggest and best names in boxing and plans to remain unbeaten on August 9.

“Most fighters say they come from the streets, for Lamont Peterson it is the literal sense. Him and his brother were left homeless on the streets of DC at the age of 10. Now Lamont has climbed all the way to becoming a world champion.

“For Daniel Jacobs this fight will have significance few could ever dream of. Danny has had a battle for life itself with cancer in order to get here.

“All three of these world champions will be put to the test August 9th as they face the most dangerous opponents in boxing…the underdogs.

“Rod Salka, Edgar Santana and Jarrod Fletcher, each of these fighters will have the chance to showcase their heart and desire and to prove the doubters wrong.

“All we need to do is look at recent Golden Boy boxing history. We know that some of the best fights of the past year starred underdogs in the fight of their lives.

“In boxing you are dealing with the theater of the unexpected. At Golden Boy we are focused on giving the fans exciting matchups that wont disappoint.

“Not too long ago, every one of these world champions Garcia, Peterson and Jacobs were in make or break fights where they were the underdogs. They know what it’s like to go into a fight and pull off an upset.

“In boxing, it’s the punch you don’t see that will knock you out and it’s the opponent you don’t expect that will beat you.

“Every fighter who makes it to that squared circle is a superstar. I remember when I fought Felix Sturm and everyone said it would be a walk in the park. And we all know what happened. It was a very difficult fight.

“Believe me when I tell you from personal experience. On Saturday August 9th these fighters will be ready to lay it all on the line. I already know who the winner will be, the fans.

“Don’t wait until the last minute, get your tickets now for what will be another great card at Barclays Center.”

“August 9th we are going to feature live on SHOWTIME three world championship fights including three young dynamic and great American stars of the sport today.

“These three fighters, Daniel Jacobs, Danny Garcia and Lamont Peterson have been a part of an incredible run on SHOWTIME CHAMPIONSHIP BOXING events over the last two and a half years, helped us bring about the best fights we can deliver to our audience and helped us see record ratings increases across the board over those last two and a half years.

“These guys [Rod Salka, Edgar Santana and Jarrod Fletcher] are hungry, they’re on the cusp of winning their first world championship fights and we expect that they will come on August 9th and deliver to the standard that we’ve set on SHOWTIME CHAMPIONSHIP BOXING with some of the amazing fights that we’ve had just this year alone.

“I don’t think anyone gave Mauricio Herrera enough credit and a big chance to give Danny Garcia a challenge back in March; we saw what happened there. I don’t think Yoshihiro Kamegai got a lot of credit when he was coming into this fight with Robert Guerrero, knowing John Molina, Jr. get Lucas Matthysse, this list goes on and on, Andrzej Fonfara against Stevenson, we saw an incredible fight there and an incredible challenge.

“August 9th we expect there to be fireworks in the ring, we expect some of these opponents to come in and bring their all for an opportunity of a lifetime and for our stars of the sport to match that challenge.”

“We look forward to another great night of Golden Boy boxing. It’s exciting to bring Danny Garcia back to Barclays Center, where his last two fights have brought the crowd to its feet.

“We’re also excited to bring back Brooklyn’s own, Daniel Jacobs for his third fight in our arena. Daniel has served as an inspiration to the up and coming fighters in this borough and I know he will have a lot of fans cheering for him August 9.

“I’d also like to welcome back our Brooklynites Sadam Ali and Zachary Ochoa each of whom are fighting at Barclays Center for the third time.

“We are looking forward to seeing all of you next month at Barclays Center and for many future fights.”