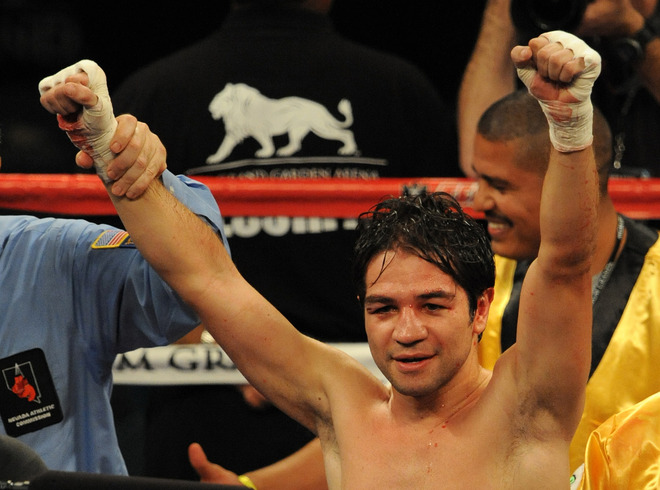 LAS VEGAS (June 11, 2014) – The Independence Day fireworks will continue into Wednesday, July 9 when FOX Sports 1 and FOX Deportes’ Golden Boy Live! series returns to Las Vegas with an exciting card featuring former world title contender Alfonso Gomez when he battles Ed Paredes in the 10 round junior middleweight main event along with rising stars Joseph Diaz Jr. and Diego De La Hoya who will both compete in televised bouts at The Joint at Hard Rock Hotel & Casino. The tripleheader from the ‘Fight Capital of the World’ will kick off the mega fight week featuring Mexican superstar Canelo Alvarez vs. Erislandy “The American Dream” Lara on Saturday, July 12 at the MGM Grand Garden Arena and televised live on SHOWTIME PPV®.

Gomez vs. Paredes, a 10-round junior middleweight bout, is presented by Golden Boy Promotions and sponsored by Corona and O’Reilly Auto Parts. The Joint doors will open at 5:00 p.m. PT and the first fight begins at 5:15pm PT. The FOX Sports 1 and FOX Deportes broadcast airs live at 10:00 p.m. ET/7:00 p.m. PT.

A popular action fighter who always leaves the fans happy, Guadalajara, Jalisco, Mexico veteran Alfonso Gomez (23-6-2, 12 KOs) first made his name in the boxing world with his run on season one of the popular boxing reality series The Contender. Since then, the 33-year-old has fought the best of the best, including a big win over Hall of Famer Arturo Gatti in 2007. Winner of five of his last seven, with the only losses coming to current World Champions Canelo Alvarez and Shawn Porter, Gomez looks to get back in the title hunt in his first fight since July of 2012.

Ranked number seven in the world by the WBC, ninth by the IBF and 10th by the WBA, Hollywood, Florida’s Ed “The Lion” Paredes (35-3-1, 23 KOs) is rapidly closing in on a world title shot, but he has to get past Alfonso Gomez to keep his momentum going. Unbeaten in 15 consecutive fights dating back to 2009, the 29-year-old power hitter finally makes his Las Vegas debut in what promises to be an action-packed 10-round battle.

U.S. Olympian Joseph Diaz Jr. (10-0, 7 KOs) has used his immense talents to impress the boxing world since the London Games plus the young 21-year-old from South El Monte, Calif. has shown maturity beyond his years along the way. Coming off of a shutout win over then 50-fight veteran Luis Maldonado in April, Diaz Jr. will stay busy in an eight-round junior featherweight bout against an opponent to be named.

Nineteen-year-old Mexicali phenom Diego De La Hoya (5-0, 4 KOs) is starting to garner the buzz once heard by his cousin, newly inducted Hall of Famer Oscar De La Hoya. Looking to stay active in 2014, “The Golden Kid” will be making his fourth appearance in the ring on July 9 and he will look to keep his win streak alive when he faces an opponent to be determined in a six-round junior featherweight matchup.

A full undercard will be announced shortly.