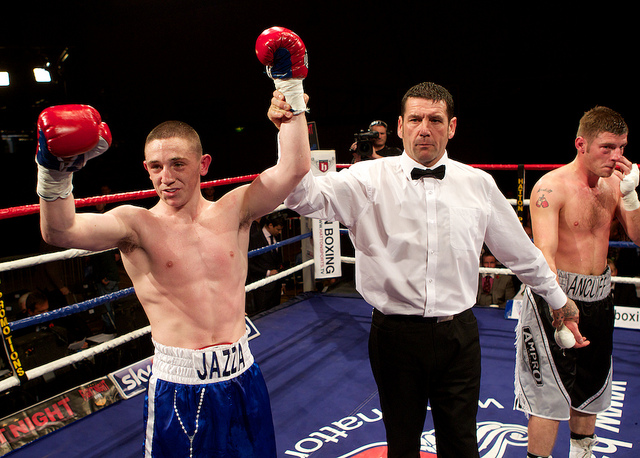 Jazza Dickens will face Jon Fernandes for the vacant English super bantamweight title on the Betfair ‘No Retreat, No Surrender’ bill at the Echo Arena in Liverpool on March 30, live on Sky Sports.

The unbeaten Liverpool starlet fights for his first major title on home turf against the Southern Area champ in a battle of two unbeaten super bantamweights. The 21 year old Hatton Promotions prospect will feature on the bumper Matchroom Boxing card and promoter Ricky Hatton is predicting big things for the 13-0 youngster who has five wins inside the distance.

“This is a massive opportunity for Jazza to win his first professional title in front of his home crowd,” said Hatton.

“We’ve had a few problems getting any one to fight him and I imagine that’s been a little bit frustrating for him, but he’s got his chance now and I expect him to grab it with both hands.

“I’ve said before that Jazza is a bit of a dark horse in super-bantamweight division and people like Scott Quigg and Carl Frampton should keep an eye on him because I don’t think it’ll be too long before he’s snapping at their heels.”

Dickens and Fernandes clash on a huge night of action on Merseyside as Tony Bellew closes in on a second World title shot in an official WBC light heavyweight title eliminator against Isaac Chilemba, while there’s the mouth-watering rematch of the 2012 fight of the year between Derry Mathews and Anthony Crolla for the vacant Commonwealth lightweight title.

Rocky Fielding defends his English super middleweight title against Wayne Reed, Team GB captain Thomas Stalker boxes in his hometown for the first time as a pro after his debut in east London on Saturday, while fellow former Team GB members Callum Smith and Scotty Cardle continue their pro journeys.