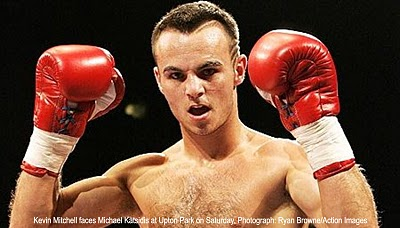 Kevin Mitchell will face Ghislain Maduma in a final eliminator for the IBF Lightweight title at Wembley Stadium connected by EE on May 31, live on Sky Sports Box Office in association with Betway.
Mitchell is gunning for a second World title tilt after facing Ricky Burns for the WBO belt in September 2012, and has since bounced back into form with four wins, three inside the distance and landing the IBF Inter-Continental crown in the process.
Maduma is the undefeated NABF champion, and the impressive 29 year old brings a 16-0 record with ten wins by KO, and promoter Eddie Hearn is excited to host the huge fight for the Lightweight division on the Carl Froch vs. George Groves rematch bill at the national stadium with the winner set to face IBF king Miguel Vazquez.
“This fight carries huge risk but also huge rewards,” said Hearn. “I strongly believe that Kevin can beat Vazquez but he has a massive test in Maduma first at Wembley. Maduma is technically very good and can punch with both hands but Kevin has boxed four times in seven months and is ready to enter deep waters – it’s going to be a cracking fight.”
Mitchell’s clash with Maduma is part of a huge night of action at Wembley, topped by Froch’s grudge rematch with Groves.
Jamie McDonnell faces Tabtimdaeng Na Rachawat for the vacant WBA Bantamweight title, James DeGale clashes with Brandon Gonzalez in a final eliminator for the IBF Super Middleweight crown and Olympic Gold medal hero Anthony Joshua MBE faces a step-up in his sixth pro fight.
Tweet