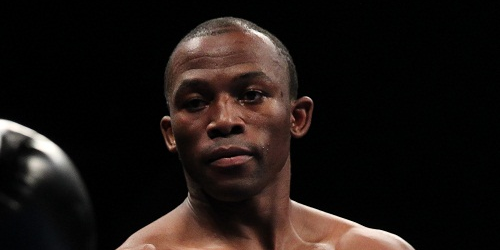 Mashantucket, CT: Thabiso “The Rock” Mchunu (16-1, 11 KOs), the South African cruiserweight who burst onto the scene last August with an upset over “Fast” Eddie Chambers at Mohegan Sun returns to Connecticut to defend his NABF Cruiserweight Title against Garrett “The Ultimate Warrior” Wilson as the main event on a special broadcast NBC afternoon edition of Fight Night on Sep. 20 live from Foxwoods Resort Casino.
Mchunu, 26, is a southpaw from KwaZulu-Natal, South Africa and had fought exclusively on his home soil before making his Fight Night debut on August 3, 2013 against “Fast” Eddie Chambers. Thabiso stunned audiences when he defeated Chambers via unanimous decision in ten rounds. He made his second appearance on Fight Night on Jan. 24, 2014 with another unanimous decision victory, this time defeating Olanrewaju “God’s Power” Durodola, also in ten rounds and capturing the then-vacant NABF Cruiserweight Title. This will be his first title defense.

The always-confident Mchunu said this about his upcoming fight with Wilson, “I’m gonna take Garrett Wilson where he’s never been before.” His trainer, Sean Smith added, “I don’t underestimate anyone, especially Garrett Wilson. But he hasn’t fought anybody like Thabiso. It’s gonna get very uncomfortable in there for him real quick. Thabiso is gonna leave with a lot more fans.”  Mchunu is co-promoted by Showpony Promotions and Damian Michael of Showpony said, “It’s time for Mchunu to deliver – Garrett Wilson is a warrior and we take no one for granted. Thabiso would beat (Marco) Huck, (Ola) Afolabi and (Yoan Pablo) Hernandez on the same night.”

Philadelphia native, Garrett Wilson, 32, made his Fight Night debut on November 16, 2013 with a ten-round unanimous decision loss to Vyacheslav “Czar” Glazkov. Glazkov had been scheduled to face fellow heavyweight Tomasz “Goral” Adamek on Nov. 16, when Adamek fell ill just days before the fight.  Wilson stepped in with only a few days’ notice and agreed to fight at a higher weight class. Despite the loss, Wilson still managed to earn the respect of the boxing community for stepping up at the last minute and taking a fight at a higher weight class against the dangerous, and undefeated, Glazkov.

Wilson said, “I have a lot of respect for Thabiso Mchunu. He is a Grade A boxer. A victory against him will mean a lot for my career. He has a lot to lose and I have a lot to gain. I will prove that ‘The Ultimate Warrior’ is a boxer as well as a puncher.” Wilson’s manager and trainer Rodney Rice added, “I have a lot of respect for Mchunu but I think Garrett is going to be too much for him. There is nothing out there for Mchunu to study to prepare for what he is going to go through on the 20th.”
“What an opportunity for Garrett Wilson to fight for a second time on NBC in front of millions of television viewers nationwide,” said Main Events’ CEO Kathy Duva. “Our policy on Fight Night has always been that we want to reward fighters who give their all to entertain our fans, win or lose. Garrett has done that. Thabiso Mchunu is a fantastic cruiserweight prospect who I believe is headed toward a world title. This is his chance to introduce himself to American boxing fans.”
Tweet