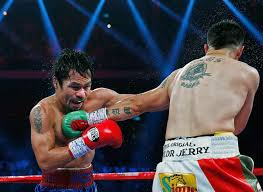 HBO Sports presents MANNY PACQUIAO VS. BRANDON RIOS, the replay of their hard-fought welterweight fight, SATURDAY, NOV. 30 at 10:15 p.m. (ET/PT) on HBO. The HBO Sports team, which was ringside for the live coverage from the Venetian Macao’s CotaiArena in Macau, China, calls all the action, available in HDTV.

The highly anticipated fight between two of boxing’s most accomplished pros was carried live Saturday, Nov. 23 on HBO Pay-Per-View®. Pacquiao turned in a dominating performance en route to a unanimous decision victory.