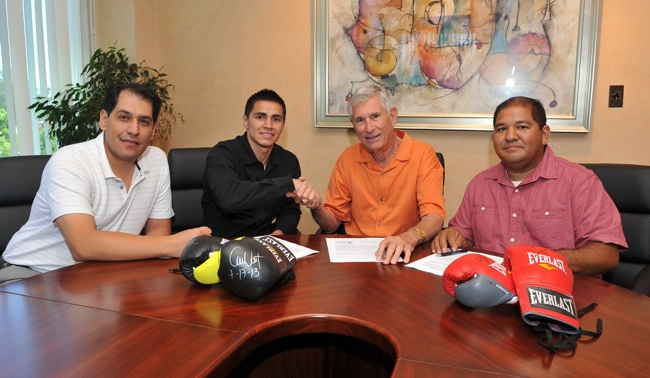 “I am extremely happy to sign with Thompson Boxing and GSP,” said Villarraga. “Ken Thompson, Gary Shaw and Alex Camponovo have provided an amazing level of support. I am anxious to start my professional career and I can’t wait to start training for my first professional fight.”

Villarraga hopes to follow in the footsteps of fellow countryman and Thompson Boxing Promotions client, Jhonatan Romero (23-0, 12 KOs), who recently captured the IBF junior featherweight title earlier this year. “Jhonatan set the bar high and that is how it is supposed to be,” said Villarraga. “I have high aspirations. I want to be the first would champion from Bogota and the best to come from Colombia.”

“Cesar has an exciting style to his game,” said Ken Thompson, president and founder of Thompson Boxing Promotions. “He is a quick hitter that does not like to stand around and dance. He has great speed and a high boxing IQ that will serve him well as he climbs the ranks of the lightweight division.”

“We are very happy to continue working with Colombian boxers,” said Alex Camponovo, general manager of Thompson Boxing. “We have an elite team from the South American country that has proven itself over time and now Cesar, under the watchful eye of his manager/trainer Danny Zamora and our guidance, has the opportunity to reach his goals.”

Villarraga starred for Colombia at the 2010 South American Games going through Hector Manzanilla (Venezuela) and Erick Banguera (Ecuador) to advance to the gold medal match against Everton Lopes of Brazil. Villarraga would bring home the gold in the 57kg event and would later qualify for the 2012 London Olympics. In London, Villarraga would lose early to Cuba’s Roniel Iglesias. Rather than sulk in defeat, Villarraga turned the loss into a learning experience.

“The London games made me even more dedicated to the sport,” said, Villarraga, who started boxing at age 15, a late start partly attributed to his early love of soccer. “Mentally I now know how to handle situations more efficiently. I have learned to value every movement, any shuffle of the feet and every punch has its purpose.”

Villarraga had an amateur record of 250 wins against 30 loses. He is married and has two boys. The youngest is a new born at 10-months and the other is five-years-old.