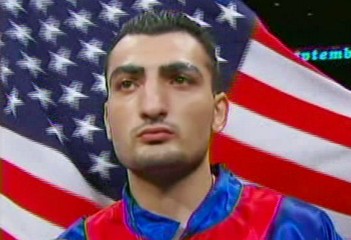 It’s been a while boxing fanatics since our last visit to the Wire Report, and I apologize for that. I hurt my back running and was a sidelined for a few weeks. It’s been a grueling recovery, but @number2snake is back with a vengeance. I will start off today’s rants with my favorite of topics smack talk, find out who is getting under Amir Khan and Freddie Roach’s skin before their next fight, also why Dmitry Pirog had to pull out of his next championship match. Big Mikey Garcia Rumor, and will Vanes Martirosyan take a shot at stepping it up?? This and more on todays Boxing Voice Wire Report..

Amir Khan and Freddy Roach can’t wait for their fight on July 14 in Las Vegas not just to silence the critics, but mostly to shut Angel Garcia’s mouth. Angel Garcia is the father Danny “Swift” Garcia who will have an angry Amir Khan chasing him in the ring in two weeks. Khan told the Dailystar.co.uk “He’s trying to get under my skin. He can say what he wants…Even his dad is doing it. It just motivated me to train harder…I think they know I’m the better fighter. They can’t beat me any other way.” I think the tactic is a little raw, but it may be working. Roach, much like his fighter, has been the victim of some of Angel Garcia’s recent verbal thrashings. Angel, who is the father and trainer of Danny Garcia, criticized Roach’s training credentials, claimed every successful fighter he’s had has already came to him groomed and ready to go. Though there is a heap of trash talk coming from both camps, I think this will be a War!! Prepare yourselves soldiers!!

Dmitry Pirog ruptured a disc in his back while training, forcing him to pull out of an Aug. 25 HBO main event against middleweight titlist Gennady Golovkin, ESPN.com reports how Pirog, who trains using sledgehammers and tires, pulled his back whilst hitting a large tire with the hammer. Pirog wanted to go ahead with the fight, yet a trip to the specialist in Moscow put an end to that.. Apparently the card will still go ahead in August, and a new foe is now being searched for for Golovkin. If, however, a replacement cannot be found, the promoters and HBO will stage an entirely different card. Needless to say, both fighters are bitterly disappointed. One of the best middleweight match-ups that can be made today, between two fighters U.S fans were very much looking forward to seeing in the flesh (the Aug. Fight would have marked Golovkin’s U.S debut) it is to be hoped this one will still go ahead at a later date. I’m sure that Lou Dibella is laughing it up, while he pokes needles into his Dmitry Pirog Voodoo Doll’s back.

Rumor has it that unbeaten featherweight Mikey Garcia will remain as mandatory challenger for WBA champion Celestino Caballero. Garcia was initially removed from the top of the new WBA ratings but that was called “an inadvertent error.” The WBA held a purse bid for the fight the camps never agreed to the fight. Garcia is also in the running for a fight with WBO champion Orlando Salido. I hope either fight gets made, it smells like unification bouts are in the air.

So we are going to see if junior middleweight contender Vanes Martirosyan (32-0, 20 KO’s) has sealed his fate, by agreeing to fight #3 WBC Erislandy Lara (17-1-1, 11 KO’s) in a World Boxing Council ordered WBC 154 pound elimination bout.  The winner will become the mandatory challenger to WBC junior middleweight champion Saul Alvarez.

Vanes has been going off on Twitter but his best Tweet summed up here in less than 140 characters. “To all the haters that talked shit about me, can all sit back and enjoy how I take Lara to school and show the world who is the best at 154.” Vanes may not have beaten many people to become the best at 154 but if he beats Lara, I bet I might consider it.

Well Guys that’s all for today’s Wire Report, I hope you enjoyed yourselves as much as i did.. Check in on us tomorrow as  I bring a preview Nonito Donaire’s championship run as well as Kelly Pavlik’s return to the squared circle. Also don’t forget to tune into blogtalkradio.com/ThaBoxingVoice.com for our live radio show on Thursdays and Sundays from 7-9pm.. Also download our Podcasts on ITunes. Join the

Revolution Good People, we are fighting for your voices to be heard!

Follow @number2snake if you want to bombarded by Boxing Propaganda.